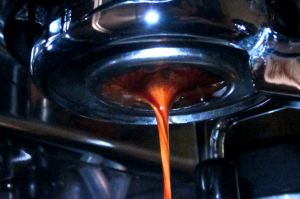 Pulling one single Espresso from the Gaggia Classic? Where is the challenge here? As this was the first thing I tried to accomplish right after I got my home Espresso machine some months ago, I can confirm it's unfortunately not that easy as it seems. „Pulling singles is more difficult than pulling doubles.“ That’s what they tell you, and that's what I experienced as well.

In the following article I will present the method I currently use to get a single Espresso out of the Gaggia Classic that is not too bitter or sour and at least drinkable. I will use a bottomless portafilter to show you the brewing process in detail.

Initially I simply used a standard Gaggia single basket. But, to be honest, I failed on all attempts. Most of the shots tasted very sour (almost like lemons) and the flow rates were way too high. Such an extreme sourness might also result from a too low brewing temperature. To eliminate that variable, I added an electronic temperature controller to keep the starting temperature fixed at 92 degrees Celsius.

Still, the result was not acceptable. Still too much flow, probably caused by channeling, resulting in sour taste. After some more studying the German Kaffee-Netz forum I found out that many people suggest switching to an alternative 58 mm filter basket, the LM1.

So I decided to get one myself. After some practice, the results got better and better. The LM1 (as shown in the picture below) is very different from the original single basket because of its mechanical construction. The proportions are about the same as with the double basket, while the original single has a much lower height. Maybe this geometry is the main cause for the improvement I experienced. 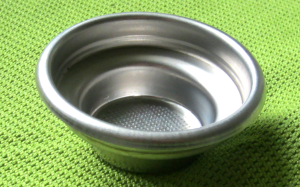 Interesting fact about the LM1: only the lower part of the volume is supposed to be filled with coffee, not the top part. A drawback: you'll need a 41 mm tamper for that.

For improving my tamping technique, the bottomless portafilter is quite helpful. A nutating tamp ("rolling the tamper in a motion like a flipped coin settling") as suggested in The Home Barista's Guide to Espresso leads to the best results for me. In the following video you can see the preparation of the filter basket followed by the actual brewing process:

The resulting brew ratio in this example is about 1/3 (7 grams in, 20 grams out), the brew time is at about 28 seconds. So the measurements look o.k. What you obviously cannot see from the video is the taste. But I promise it is much better than in my initial results.

Speaking about the grind, I've tuned the grinder setting using the method described in Espresso 101: How to Adjust Dose and Grind Setting by Taste. Unfortunately though, the resulting highest and lowest grinder settings are only three steps away from each other. This makes fine tuning rather challenging. This is probably due to the quality of the grinder, which honestly is one from the lowest possible price segment.

Why bother? Couldn't one simply stick with doubles if the handling of the single filter basket is too complicated? Sure you can. For grinder fine-tuning though, I consider it a waste of coffee beans to use double shots. I also prefer to prepare two singles after each other so I can enjoy each of them separately and without hurry.

I hope the steps I described make life easier for you. Can you reproduce this method? Let me know what your experience is by leaving me a comment below or via twitter: @ronalterde.